The Environmental Clean-Up Product For the 21st Century

HydroWeed is one of Nature's non-chemical wonders! 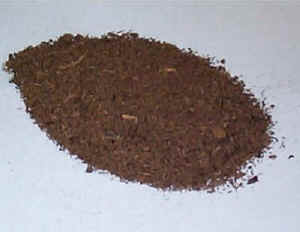 Made from a select type of peat moss, with processing that sterilizes the individual fibers and kills off insects, Hydro-Weed is a safe, environmentally friendly product.

Surprisingly it won't absorb water, and will not release the oil and other hydrocarbons that it absorbs so effectively, making it ideal for cleaning up any type of oil or chemical spill.

While peat moss is normally used in gardening to retain moisture around plant roots, Hydro-Weed differs in that it rejects water indefinitely, but instead locks up petroleum or chemicals and heavy metals, preventing them from leaking or washing out once they're absorbed.

Any type of hydrocarbon leak on the surface of water be it an ocean, lake, stream or river presents a danger of contamination to the water as well as all living creatures, vegetation and shore lines, but sprinkle Hydro-Weed on the top of the spill and it will be 'locked up' so that it cannot stick to any living creature, vegetation or shore line. It also prevents the chemical from sinking to the bottom once it is in its fiber.

A bird landing on the top of a spill treated with Hydro-Weed would simply take off again without a single drop of oil on its feathers.

One pound of Hydro-Weed will absorb eight to twelve times its weight in medium weight oil and that's fifteen times more than clay absorbers.

Hydro-Weed is non corrosive, non polluting and non toxic.  It's completely safe and easy to use. Once the spill has been cleaned up, you can simply dispose of the Hydro-Weed by spreading it along a fence line or elsewhere for weed control. Nature will then provide the microbes who will eat the oil or chemical contained in it and the peat moss construction of the Hydro-Weed will benefit the soil just as any other peat moss would do.

Hydro-Weed is ideal for those living near a body of water, boat owners, and anyone else who regularly uses chemicals or encounters spills.

HydroWeed works just as well on dry surfaces or on soil as it does on water. It will selectively pick up a chemical spill on a wet roadway and leave the water behind.

Hydro-Weed can be used as a packing, material in boxes containing shipments of chemical products, or anything else that may leak or create moisture.

Every transporter should carry Hydro-Weed to safeguard against insurance loss and environmental damage. Every household should have an ample supply of Hydro-Weed to catch and absorb oil, grease and other hydrocarbons, and dispose of them in an environmentally safe manner.

Nothing else does what Hydroweed does!

A top ten chemical company last year had a 500 gallon spill. They cleaned the spill with a clay-based product used by most organizations.

The spill took seven hours to clean and they had 55 drums of hazardous wastes to remove at $250.00 per drum.

Recently they again had a 500 gallon spill, this time they used Hydro-Weed. The end result was the clean-up took two hours with only 14 drums of waste which they had the option to be incinerated in lieu of hazardous waste to be buried.

A Fortune 500 chemical company in Delaware had oil leading and filling up their cement block walls. They hired an environmental cleanup company to drain the walls and clean the spill.

The company started the cleanup by knocking holes in the blocks and letting the oil run out They used Hydro-Weed to absorb the oil by covering the floor. Hydro-Weed was ideal since it is non-tracking.

The chemical company said they had never seen such a product work so well. The environmental cleanup company calls Hydro-Weed their magic powder.

What is Hydro Weed?

Joel Jones in Virginia says:
I just wanted to let you know that we ordered HydroWeed because somehow heating oil started getting into the crawl space under my daughter's house, causing an unbearable smell in the house. We pumped out what was under there with her sump pump but it kept seeping up from the ground. I found you and your product during an online search and decided to give it a try.

When my husband crawled under her house and started putting the HydroWeed down he was utterly amazed. He spread it everywhere he could actually see the oil film or the little pools of oil. We used all of the 5 lb. bag and then all went out to eat. When she returned home in about 3 hours, she could already tell a big difference in the odor in her house; it had diminished considerably.

Thank you so much for your wonderful product. I just ordered the larger size to keep in case the ground gets saturated with water again and the oil that's under there rises to the surface again. Again, thank you.