Each incident of "Suppressed Inventions" is presented in the following format and separated by a horizontal line: Date of incident   Reference   Description of incident

Want to know more?...Article "Alleged New Source of Power". Thanks Bob Nelson . 1947 J3-C,43 FLYING SAUCER, T. BROWN Townsend Brown constructed Flying condensers shaped like Saucers. A high positive charge on the leading edge caused thrust to be generated in the direction of the region of low flux density. His Saucers required no jets or propellers, no moving parts at all. They modified the gravity field around themselves to produce, in effect, the incline of a "hill" under the craft, which they slid down like a surfboard on a wave. (aka Biefield-Brown effect) Want to know more?...Article US02949550 1960 Brown flying saucer drawings.

1947 FLYING SAUCER, J.R.R. SEARL. Searl, an military electrical engineer, builds a composite motor driven disc. After starting the device, the force of the disc breaks the motor drive shaft. The disc jumps up into the air, glows blue, and disappears. When the English inventor tries to get a patent on the disc, it is "secretized" by the Queen of England. Want to know more?...Article Levitation disc photos.  Thanks Bob Nelson   Want to know more?...Article Thanks John Searl!

late 1950's J1-A,1 CARBURETION, FISH/KENDIG B1-B,3 Variable Venturi The Fish/Kendig Variable Venturi carburetors get some very interesting mileage figures. The Fish carburetor even got into production on a small scale, but for some unknown reason, these carburetors fade away in the early 1960's. (see early 1970's) Want to know more?...Article US03752451 1973 Kendig variable venturi carburetor drawing. Want to know more?...Article US02801086 1957 J. R. Fish carburetor drawing. 1953 J1-A,26 CARBURETION, POGUE CARS Magazine states that in the opening months of 1936, Pogue panicked the Toronto stock exchange and threw fright into the major oil companies. Stock exchange offices & brokers were swamped with orders to dump all oil stock immediately. This same article states that Winnipeg's largest automobile dealers tested the POGUE carburetor and got results of up to 216.8 mpg! (see 1/7/36)  (See 1981, Ultra-Lean carburetors) Mid 1950's B1-B,3 CARBURETION, BASCLE, Pat.#US04257378Joseph Bascle got a Patent for an improved carburetor which was used on every car in the Yellow Cab fleet in Baton Rouge, NY. It raised mileage by 25% and decreased pollution by 45%. Want to know more?...Article US04257378 1981 drawing. 1953 J3-E,39 INTEGRATON, VAN TASSEL UFO Contact, George W. Van Tassel begins the construction project on the INTEGRATON machine in Yucca Valley, CA. Its' purpose is to rejuvenate the human physical frame. (Tom McGraw, deceased, told of sending a camera thru time at the Integratron and photographing dense vegetation of the PAST where, now, is only desert.) Want to know more?...Article "Introduction to the Integratron Aug. 23, 1958 J3-A,91 FLYING SAUCER, OTC-X1, CARR Spacecraft Convention, Pleasonton, CA: Panel discussion between Daniel W. Fry and the inventor of the OTC-X1 Flying Saucer, Otis T. Carr and Major Wayne S. Aho, formerly Army Combat Intelligence Officer during WWII. (see 5/5/60) Mar. 9, 1959 J3-A,49 FLYING SAUCER, OTC-X1, CARR Immediate News Release to ALL Media: OTC Enterprises announces plans to market kit plans to build a prototype model of the firm's projected spacecraft, the OTC-X1, said to be under construction now for launching later this year. Mr. Carr plans to launch a six-foot operating model in April in Oklahoma where it is now being built in field laboratories. (see 4/19/59;5/5/60) Apr. 19,1959 J3-A,53 FLYING SAUCER, OTC-X1, CARR The OTC-X1 didn't fly for several reason today: Mr. Carr was in the hospital for eight days with lung hemorrhage. There is no indications of cancer, TB or other lung ailments. Also, in the preliminary pre-flight test the accumulator developed a leak which sprayed mercury all over the inside mechanism. "We don't plan to announce the next pre-flight test in advance", said Mr. Wayne S. Aho. (see 5/5/60) Nov. 10, 1959 J3-A,19 FLYING SAUCER, OTC-X1, CARR Pat.#US02912244Otis T. Carr gets a Patent for an "amusement device" (Flying Saucer). He claims that this actually demonstrates a workable space craft. Want to know more?...  Article US02912244 drawing. Dec. 10, 1959 J2-D, J3-A,58 FLYING SAUCER, OTC-X1, CARR Mr. Wayne Aopes to say, "take me to your leader, moon-man!" Mr. Aho announces plans to take the OTC-X1 to the moon at 12:01 a.m. on Dec. 7, 1959. He will get there in 5 hours and orbit it for 7 days, then he will return to earth. The Carr space ship is 45 ft. in diam. and weighs 30 tons and is powered by electricity. Maj. Aho was formerly an Army Intelligence Officer who says he landed on Omaha Beach in Europe on D-Day and won the Bronze Star and Purple Heart for wounds received in the Battle of the Bulge. He claims to have seen 13 Flying Saucers in flight. (see 5/5/60) May 5, 1960 J3-A,54 FLYING SAUCER, OTC-X1, CARR Pat.#US02912244 Victorville, CA: First time ever in any newspaper: Otis Carr tells how his Flying Saucer, the OTC-X1, works. Carr developed his power plant for the saucer at the Osbrink Plant in Apple Valley. The OTC- X1 is described "as being two tops that spin in opposite directions around a single axis...The entire circular-foil craft that is Mr. Carr's most profound development, is an assembly of only two major moving mechanical parts." (see 3/9/59;1/61) 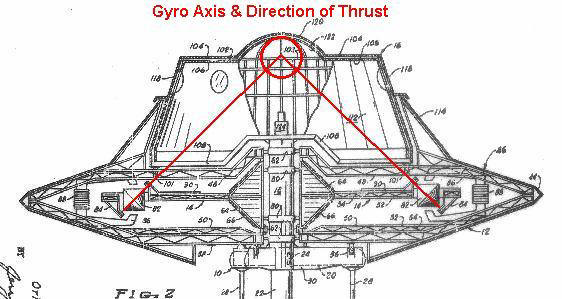 Spring, 1980 B1-A,59 MOTOR, FREE ENERGY, JOHNSON Science and Mechanics magazine interview regarding the JOHNSON FREE ENERGY motor: When asked if he (Johnson) thought that the load on his motor might drain the magnetic spin (of the electrons) he replied, "I didn't start the electron spins and I don't know anyway to stop them - do you?" The Johnson Permanent Motor is one of the most promising possibilities in the world of "Free Energy". It is simple to construct and yields high output. (see 4/24/79)  Want to know more?...Article Science & Mechanics, 1980. Want to know more?...Article Open sourcing the Howard Johnson Magnetic Motor technology.

Sep. 11, 1980 J-3J,4 RADIONICS A-9 CHARLES WHITEHOUSE Norfolk, VA: Lawyer Charles E. Poston decided he had the "right" to "judge" Dr. Charles Whitehouse, of Virginia Beach, VA and revoke his chiropractic license on the grounds he was practicing medicine outside the scope of his chiropractic profession. Guilty?... He was helping many people FREE OF CHARGE, and especially helping mentally retarded children with color therapy and radionics. Whitehouse is on the Board of Directors of the U.S. Psychotronics Assoc. and is an expert Radionics Operator. Even the U.S. Navy has purchased one of his radionics inventions for tracking submarines. Whitehouse was giving away approx. $200,000 in treatments a year. (see 12/80) (see 1/7/81) Want to know more?...Article Section: United States Psychotronic Association. 1980 J1-A,27 CARBURETION, POGUE Mr. Arthur C. Sgrignoli, after 45 yrs., has built a legendary POGUE carburetor by hand and is said to have achieved an efficiency of 86%. Contact was made thru his brother, William J. Sgrignoli. (see 1/7/36)  (See 1981, Ultra-Lean carburetors) Dec., 1980 J-3J,5;A-9 RADIONICS Norfolk Circuit Court, VA: Dr. Whitehouse won his appeal and was awarded his chiropractic license back. (see 9/11/80)

Jan. 7, 1981 J-3J,5;A-9 RADIONICS Virginia State Supreme Court, VA: The lower courts' decision is reversed and Dr. Charles Whitehouse's' chiropractic license is again revoked. Whitehouse will again be going to court in March, 1981. (see 1/7/81) (see 12/80) Jan. , 1981 J1-A,29 POGUE, Charles N. As of January, Charles N. Pogue is still alive at age 81 and is living in a rest home in Winnipeg, Canada. He refuses to talk to anyone or to receive visitors from outside his own family. (see 1/7/36)  (See 1981, Ultra-Lean carburetors) 1981 J-3J,8 TESLA EXPERIMENTER, ROBERT GOLKA Wendover, UT: Robert Golka, a well-know Tesla researcher, has been victimized by an attack on his workshop which has, for years, been in a deactivated Air Force hanger. His high powered energy tower outside the hanger has been partially destroyed. A witness said insulators and sections of the tower were laying around the base. In the mean time the rent on the Air Force hanger has been raised 1000 percent! These new difficulties now threaten to bring an end to his research with Tesla devices. 1981 J-3J,8 SUPER PAINT Research funded by Naval Air Systems Command has come up with a polished film paint that will reflect 98% of the energy directed at it by a high energy laser beam weapon thus making Star Wars obsolete. 1981 J-3J,16 CANCER CURE DOCTOR ARRESTED Buenos Aires, Argentina: Carlos Jerez has been jailed because he had healed 13,000 cases of cancer, including terminal cases. Jerez used a maser whose electric output was polarized through an artificial blue sapphire crystal. He also invented a computerized tomographer that detected and indicated the missing chemical elements in the diseased body. His equipment and properties were seized by the secret police and totally destroyed. All of his medical records were confiscated by the Servicio de Informaciones del Estado (SIDE) and his records are being kept by the Secret Police. He is incarcerated at the Prison of San Pedro, 250 kilometers north of Buenos Aires, Argentina. Want to know more?...Article (in Spanish) 1981 J1-A,29 CARBURETION, POGUE ULTRA-LEAN CARBURETORS of Northridge, CA, is selling a set of plans for the POGUE carburetor for $50.  (see 1/7/36) Want to know more?...Article FREE from REX RESEARCH. Thanks Bob!  1981 J1-A,28-29 CARBURETION, WALLACE Allan Wallace's experimental carburetor gets 30 mpg at a speed of 55 mph for 60 miles. Want to know more?...Article "The Secret Super High Mileage Report" FREE eBook. Thanks Bruce 1981 J1-A,29 CARBURETION, SHELL MOTOR OIL CO. At Sell Motor Oil Mileage Marathon, Great Britain, a new world record is set at 1368 mpg on a specially built three-wheeler with a 90cc engine using the "sprint & coast" method. 1981 J1-A,29 CARBURETION, OGLE Tom Ogle SOLD OUT his high mileage carburetor to ADVANCE FUEL SYSTEMS of Seattle, WA, for $250,000 while still retaining 20% interest in his device that got 100 mpg on a 1970 Ford. (see 1977) 1983 WATER CARBURETOR, CELLA Carl Cella builds an water carburetor from surplus aviation parts and mounts in his 1979 Cadillac Coupe de Ville. Runs fine, with no exhaust pollution. He is told by DOE agents if he tried to sell pre-built units, he'd have a lot of "problems". Want to know more?...Article Carl Cella hydrogen car. Thanks Josef Hasslberger 1985 J1-A,1 CARBURETION Well, the 1968 FORD MOTOR CO. high-mileage carburetor (26:1) isn't on the market yet. I wonder what happened? (see 1968) 1993, AIDS CURE, Steven Kaali US05188738 Want to know more?...Article "HIV & Virus attenuation by blood electrification." US05188738 drawings. Want to know more?...Article "HIV & Virus attenuation by blood electrification." Nov. 1997 ANTI-GRAVITY, RICHARD FOSTER US05685196. Foster gets patent for inertial propulsion device. Want to know more?...Article US05685196 drawings.

1. The mixed chemical stone found in England and secretized by the Queen.? It generated its' own electrical sparks.

Want to know more?...Article "Unconventional", suppressed, dormant, or emerging sciences, technologies, inventions, theories, therapies. Thanks Bob Nelson. (1982? Yep, I was getting articles in the snail-mail from Bob before there were home computers!)

Want to know more?...Article The World has been pulled over your eyes, to blind you from the truth. Things are not as they appear to be. Thanks Vitamin City.

Want to know more?...Article Suppression from Higher Up. Inventors Beware! Thanks Erik Masen.