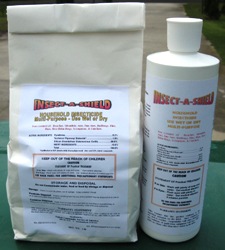 Conventional insect poisons kill with gross impact on the insect's respiratory system. The poisons in these insecticides are also very toxic to humans.
By contrast - Insect-a-Shield is odorless and harmless to humans and animals, but it still causes bugs to rapidly dehydrate and die. Fossil shell flour can be used to scrub the intestines and can kill parasites in animals and mammals.

What's in it?
Insect-a-Shield contains diatomaceous earth. Fossil shell flour is a particularly pure variety quite safe for consumption.

Insect-a-Shield is a natural and safe alternative to poisonous insecticides. Added to the varieties of Insect-a-shield for killing bugs externally, is Pyrethrum, one of mans oldest insecticides - highly lethal to insects.  It comes from chrysanthemum flowers located in Kenya and Ecuador and is a digestible vegetable extract of the flower. Piperonyl butoxide is another vegetable extract that is an insecticide in its own right. It is added to Insect-a-Shield to further enhance the Pyrethrum making it even more effective.

Together, these three ingredients make Insect-a-Shield a safe and effective bug killer. 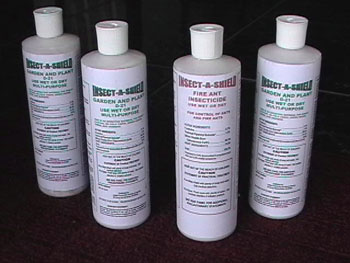 More Reasons to Use Insect-a-Shield

Do your part to help reduce the huge problem of contamination to our water and plant life, caused in great part by the widespread use of conventional chemical pesticides.

Insect-A-Shield is a safe and superior alternative to these chemicals.

Insect-A-Shield is the natural choice and a fantastic safe alternative for insect control.

Application:
Apply the power on bugs directly or put it where they travel. You can mix the powder with water to make a convenient spray for use in your home or garden.


All Diatomaceous Earth is not the same. There really is a difference!
There are over 25,000 varieties of Diatoms. Each deposit is different because of ocean currents mixing in whatever foreign material that might be handy.

Fossil Shell Flour:
Although it is sold as an anti-caking agent, that is perhaps what it is known and used for the least. Users of Fossil Shell Flour who feed it to livestock have seen noticeable improvements in the health of their animals.

“Now and then, a man would say, ‘did you know that if an animal has arthritis and eats food with Diatomaceous Earth in it, that the arthritis goes away?

Another says that when he fed food containing Diatomaceous Earth to a dairy cow that they increase their milk production five to seven percent. One farmer who … could tell you to the penny what each cow cost him in vet bills per year… discovered that his vet bills dropped 70%. Other people… discovered that the odor of the barnyards had greatly reduced, or that the fly population decreased about 90%.”

Special notes about the products and use
Insect-a-Shield comes in seven varieties, however you need only the Household variety to kill all varieties of insects.  Simply sprinkle Insect-a-Shield powder on any insect or in areas where bugs might travel, and they die. Government regulatory agencies seeking to justify their existence, create ridiculous policies requiring unnecessary warnings on the label. This is clearly the case with Insect-a-Shield. You can safely put fossil shell flour in your animal's feed.

With the help of Arizona State University, our product was patented as a “wormer”. Unlike most worming products, Insect-A-Shield is not a deadly poison. Strangely, this caused a problem. You see, once you claim that a product can kill bugs, it has to be registered with the EPA, classified as an insecticide, and sold under a different label. So today, our pure, food-grade, organic diatomaceous earth is sold in two bags. One bag is labeled "Fossil Shell Flour," with no warnings of any kind required on the packaging. It is certified organic, is perfectly safe to add to feed or mix with water and drink, and it is as safe as spring water. The same diatomaceous earth, is packaged in another bag that says it kills bugs. This package, called "Grain Protectant",  and is required to have unnecessary warnings on the label, like “CAUTION - Keep out of the hands of children.”  Diatomaceous Earth in this package could be mixed with stored grain. A single treatment would keep the grain absolutely free of bugs and free of poison residues — indefinitely! With the Grain Protectant label, it is an insecticide and must not be fed to animals. (Huh???)

Hey, nobody has told the government yet that what they do should make sense. Because this natural product kills bugs the maker pays the EPA $5,600 each year for permission to sell “insecticide”, and must also pay each individual State Dept. of Agriculture a fee, ... so thanks to your government "Protecting you" the cost of Grain Protectant to the user is higher than the cost of Fossil Shell Flour.

It's clear why the word ‘bureaucrat” upsets farmers every time they hear it!  (Side note - After a petition was filed with the EPA, the agency issued diatomaceous earth an exemption from tolerances from pesticide chemicals in or on raw agricultural commodities. They found that the product did not pose any public health risk. However, to this day, the Grain Protectant is still labeled like a dangerous substance and of course, the EPA and state agencies still collect their annual fees.

Over the past 30 years, discoveries and claims about our Fossil Shell Flour continued to come in from customers, veterinarians, farmers, and universities. For the past three years, there has been a growing number of people writing to us about the health benefits that they have received from taking FSF on a daily basis.

Another vet from Canada working with 2000 calves discovered that calves getting Diatomaceous Earth in their diet did not have scours. Scours is a disease that causes diarrhea (and severe dehydration) in young pigs and calves. The disease spreads very quickly and can kill many of the young pigs and calves on a farm in a very short time.

A PhD medical researcher did everything the medical system could suggest to help with his case of nickel poisoning. He suffered for years while trying to get rid of the problem that was destroying his health. After several people suggested that he try our Fossil Shell Flour, he decided to look into the product. During his research he learned that our product was totally non poisonous, so with nothing to lose, he decided to try it. In sixty days, his blood was clear of nickel and a drastic improvement in his health took place in just weeks. Further research shows that it will remove aluminum, lead, and mercury from the blood. He has stated (that) “This is the nearest to a miracle product that I have ever seen, … it does so much good in the body and has no side effects.”

A medical doctor, giving it to patients (mostly elderly) whom he could not seem to help, found that regardless of what their problem was, they seemed to get better! Finally, he began to research and found a number of articles on the Internet and in magazines and two books on the body's desperate need for silica.

Hmmm, imagine that a Doctor believes our product – sold only for the simple purpose of making feed flow better – is possibly a miracle health product…

The toughest part about selling Fossil Shell Flour is that we are prohibited from telling potential users all the wonderful things that are product has done for others. In fact, we are required not to make any claims about what the product can do. But without the millions of dollars required to carry out the double-blind studies that the FDA will accept, we are forced to do just that.

But, as people began to discover for themselves all the wonderful things that it could do... they started to tell anyone who would listen about the benefits they were getting. word of mouth advertising has been absolutely essential to our business. We began to get calls from total strangers, asking for that "stuff" that "cured arthritis"," got rid of parasites"," kept slugs out of the garden", "helped plants retain more water", "killed bed bugs"...  and dozens of other requests.

So we simply offer our product as an anti-caking agent and if customers find any other benefits, it’s a bonus!

Of course, I've heard of people besides myself who reportedly are taking a heaping tablespoon of "Fossil Shell Flour" a day with water, juice or anything that works for you. I drink a tablespoon with a banana smoothie daily. It's GREAT!